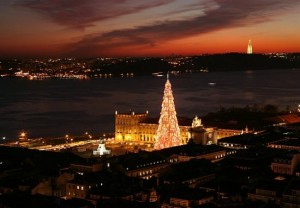 If you are thinking about spending your Christmas in Portugal, we can give you ssome advice and ideas that may interest you. Despite being  a united country, Christmas is celebrated differently deppending on where you are, so we advise you to rent a car cheap at the airport and travel all around this corner of the world, from north to south.

In the north there are some festivities that are inherited from Norman traditions inspired on Valkyrie and druids.

In the region of Bemposa, on the 26th of December and on the 1st of January, they still celebrate the days of the “cowbell”. A tradition that entails auctioning a mask that allows the best shepherd the “term of office of the cowbell”. It allows him to go out at midnight to beg from house to house for the church, even though they normally take advantage of this license for other less kind acts, like chasing the village women.

Since 1989 in Oporto they hold the International Festivity of Puppets. Even though it is aimed to an older public, there is also a show organised for the little ones of the family.

In the centre and in the south of Portugal, they celebrate Christmas based on religious  rituals: nativity scenes, mass…

The colours of the night, the smell of roasted chestnuts, the Portuguese cloaks and even the cold, make Lisboa a very christmasy place. Until January, 2 million low cost bulbs light up the most charachteristic places of the city, every night.

Despite celebrating Christmas differently, the element that cannot be excluded from any Portuguese Christmas is the fire, a symbol of  the victory of the light against the darkness. On Christmas Eve, after the famous “Misa del Gallo”, bonfires are lit, and it is believed that the bigger the log is and the longer it takes to burn, the better the harvest of the New Year will be.

Regarding the Christmas gastronomy, we can´t forget to mention the cod, a taditional Portuguese dish. In the northern areas the traditional dish for New Year´s Eve is boiled cod with potatoes and eggs. In the southern areas they are much more tradional and they perfer turkey.